The whole family on the Farmall Tractor including John and Sharon Steffens.  Children enjoy playing on this and it's a great place to take pictures. 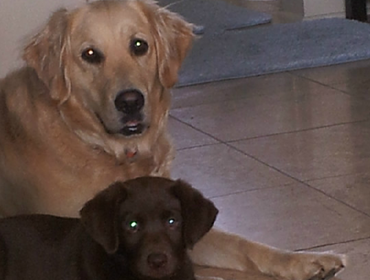 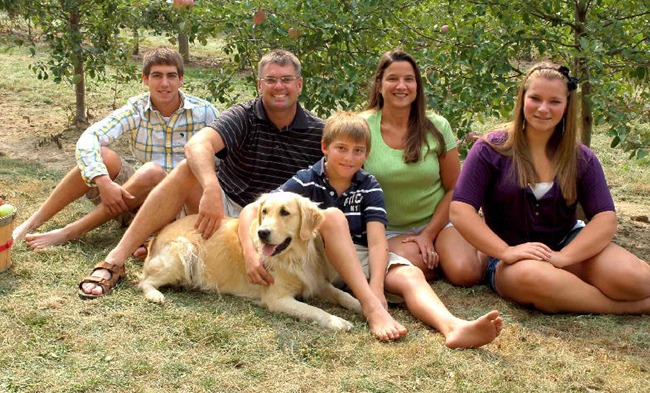 Peaches is a 6 year old Golden Retriever and Paisley is a 3 year old Chocolate Lab. 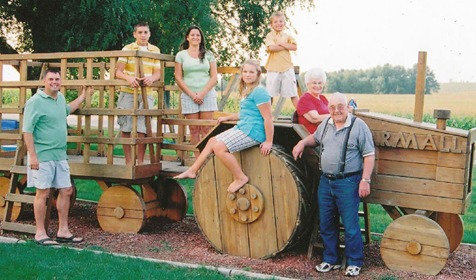 The Steffens family arrived from Germany in 1846 and settled in Alpine Township in 1852.

The parcel where the farm market is, was purchased in 1983.  It is located in Sparta Township

and there wasn't an apple tree on it when it was purchased. The existing barn is over 100 years old and was refurbished in 2010. It has beautiful hand-hewn beams inside. 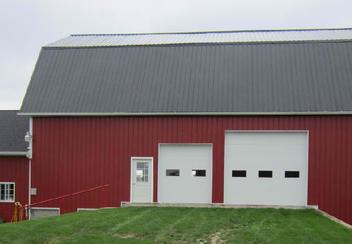 The production of apples is a year-around effort.  Each tree must be trimmed every winter and then as we look forward to April the buds appear and about the middle two weeks of May the trees bloom in gorgeous array.  We rent bees to increase the pollination process which is also enhanced by the wind.

In a normal year most of the apples picked at Steffens Orchards are sold fresh in grocery stores across the Eastern United States, England, Israel, Central America and South America. Apples that aren't eaten fresh are used to make apple cider, applesauce, slices for processing, and apple desserts.

We hope you enjoy your visit to our orchards and market and please come back to see us again.

How did the market start?

WE LOOK FORWARD TO MEETING YOU

We welcome you to our website Steffens Orchards. This is a family farm operation currently operating 300 plus acres of apples. Rob and Christine  Steffens, the fourth generation  own, operate and manage the farms and market. John and Sharon Steffens, now retired, still help wherever needed. We are farming in Alpine, Sparta and Chester Townships producing apples, sweet cherries and pumpkins.

The market began in 2002 with just a wagon, bags of apples and some pumpkins by the roadside.  Sometimes someone was

there to help but it was often on the honor system.  People began to stop and gradually we became known.  With our elevation and frequent winds it soon became apparent that we needed some permanent shelter. So the market was built onto the end of the barn  in 2003 which at that time was white.  In 2010, the barn was refurbished and became red.

Most of the apples at Steffens Orchards are picked by workers who move across the country picking fruit of all kinds as it ripens. Without them we would have a very difficult time operating the orchards.